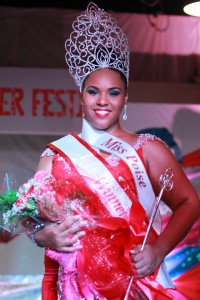 She copped a cash prize of 3,000, official crown and sash, scholarship, dinner for two at Bitter End, lunch and stay for two at Nail Bay, official trophy and other tangible prizes and appearances.

For the question and answer segment, each contestant had to answer the same question; ‘With the entire world becoming more conscious of preserving the environment, what do you think is the most important environment issue facing the BVI and how should we address that issue?’

Paul stated that the most important issue is waste and the BVI should address it by getting people in the community to pick it up and clean up the community, especially the tourist areas.

Charles in her answer stated that water pollution is the most important environmental issue facing the BVI. She stated that the BVI is the sailing, snorkeling and diving capital of the world and as such, there is need to preserve it and ensure that when tourists visit, they do not pollute the water by dumping their waste in it.

Prince said garbage is the most important environmental issue and in the BVI, people tend to throw garbage on the road. She suggested the community learn to recycle.

Wilkinson stated that plastic waste is the most environmental issue and spoke about involving the youth and paying workers to clean up the streets better.

Contestants that did not place will receive a $500 cash prize, scholarship, dinner for two at Bitter End and other tangible prizes.